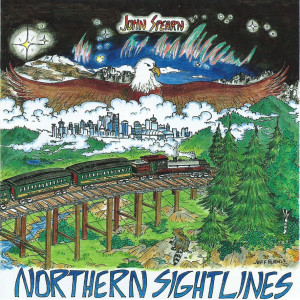 These are songs that I have written and developed for use with students across a time span of twenty years in the classroom. I am pleased to be able to share these original Canadian songs with you, because they have been tremendously successful for me. The process of writing a successful song is challenging, and I would like you and your students to know that every effort was made to ensure that the songs are informational, resourceful, enjoyable, and commercially viable.

Franklin set sail, they say for the north arctic way,
with the ring of the king on his hand.
He had two fine ships, and ten dozen men,
As a key to the cruel arctic land.
In an age when fear of failure . . . would frighten many a sailor.
But to perish from the bitter chill, in a land with its own free will?
Aboard (H.M.S.) Erebus, and (H.M.S.) Terror, they’d face the cold reality
. . . face the cold reality.
The ships on their way traveled through Baffin Bay,
For the Northwest Passage they did sail.
The glory of the quest, would keep the crew at rest,
But the north wind whistled the tale.
And the endless stories were told . . . of the orient, spices, and gold.
Thirty below on deck, fifty below below . . . This land demanded its price.
Soon those ships would be meals for the ice!
Both ships were locked into the ice.
Outward they marched, marking stones on their quest,
And the dead to their graves they did send.
Main ‘nest became a coffin, even for the best,
On the deck was the devil’s good friend.
And the long, cold arctic nights . . . dwindling coal was the poor stoker’s plight,
When a murderous gale suddenly prevailed! Transforming the main sail,
Into a dangling guillotine of ice . . . a dangling guillotine of ice!
Eighteen months frozen in, now they’d pay for their sins!
Amidst wreckage where they prayed for hell
Overland they did go, it was sixty below. Where they ended up, no man dare tell.
And the puzzle still remains, for what the final message contains.
How the last log reads? We may never see!
A doomed man’s will to perceive . . . John Franklin.

When They Touch The Sky

Albert Lacombe was known as the Great Translator. He was vigilant in his work as a language transcriber and decipherer for the Blackfoot, Blood, and Cree First nations, and a renowned peacemaker. An Oblate missionary, he became known as “ah-sas-ka-pap-i-wah” (Blackfoot), the Man of Good Heart. In June each year, this song is in use at the annual Lac Ste. Anne (Alberta Beach) pilgrimage, attended by Northern Alberta and other touring faithful who come there to benefit from the “healing” waters.

When he came to the Territory . . .
The wild lands of the Blackfoot, the Blood, and the Cree.
Four thousand light years from his home on the Seaway,
Albert was his name. And the Lord was his fame.
And there’d be no more comfort, no fortune, just glory.
Where? . . . in God’s name.
An Oblate priest, He’d follow the plan,
With a mission as clear as the bell.
To work with the natives at Lac Ste. Anne,
And make them believe – pray tell!
How you never question your station,
Never cry when you grieve for your home,
And the priest, called Lacombe,
Like a castaway did roam!
Bearing his cross, like an albatross, on his heart.
Travelling far and away, the Lord’s word to impart.
Never ceasing in kindness, always stopping to pray.
Staying and talking, smiling and giving, boldly praising the day.
Blessing and healing, teaching and sharing, throwing himself in the way!
He’d say, “The Lord is our constant companion,
On this frozen earth that we roam!
And very nearby, there is Heaven,
To get there . . . just visit our home!”
As an honour in death the natives who called him Good Heart,
“Aah-sass-kit-si-pah-pi-wa’s* gone!”
a death cry did start.
A lake full of tears, they mystically praised the dead father,
And forever, amen, Lac Ste. Anne . . . will have healing water.
*Blackfoot for “The Good Heart”

Take Me Back Lord

Another town, another round . . . I ain’t got nowhere to go.
Rumblin’ sound, of a Greyhound . . . she’ll be leaving, I know.
Late this morning I got to wondering
Now she’s on that bus today.
Could she be right for me?
Guess I’ll be on my way.
I walked on, and I heard the song og a daddy and his little boy.
It was beautiful and as usual, I wished I could share their joy.
But I let family life get the worst of me,
Why can’t I have that chance again?
Lord my nose just found a liquor store,
Guess I’ll spend my last fin.
My illusions, I can see myself . . . in a soft cozy chair.
Children playing, they’d be saying, “Daddy take us to the fair!”
Late at night, they’d be sleeping . . . sweetly breathing, prayers all said.
And she’d be waiting, she’d be there for me,
Soft gold hair, big warm bed . . . I could rest my weary head.
Take me back, Lord,
I wanna go back there,
Soft gold hair, big warm bed . . . I could rest my weary head.

The Yukon Gold rush is portrayed from the perspective of a typical stampeder and his experiences. A favorite of the Atlin Arts and Music Festival committee.

The plight of the real builders of the Canadian Pacific Railroad is brought to light. This song is featured in Our Canada: Origins, Peoples, Perspectives Teacher’s Resource (Alberta-Authorized Social Studies curriculum, grade seven, 2006 Nelson Thomson), and are transcribed to music notation for a feature article in Canadian Folk Music magazine, Spring 2008.

* Upgraded and edited for re-recording 2013, including Francophone content), The 1885 Riel Rebellion is still stirring the hearts of Canadians. Told with historic detail of names, places, and events, the song is used for lyric study and listening activities in the 2006 Alberta Social Studies grade seven teachers resource. *Important recent update: This song was also a main-stage headline media selection for “Back to Batoche 2013”, 48th annual festival (Saskatchewan), for which John was chosen as a feature performer.

We arrived near Batoche that day, with chains to take Riel away.
Our orders from Middleton were clear: “Rout the Metis . . . right here!”
The Saskatchewan River, on a steam paddlewheeler, we sailed.
With our cannons and horses, provisions and tack,
And a fine eight hundred, we’d surely prevail.
And those men of Dumont were a ragged brigade,
God wouldn’t allow them to lose! Riel said, and they stayed . . .
With our scarlet and polish, we smelled of the English,
They could see us from miles away.
And in the trenches the Metis started to pray . . . they started to pray!
We had the finest of rifles and ammo’ in our revelry.
With one gun, made by Gatling, let loose! The devil to see!
And the two hundred Metis had muskets for shot,
And for three remarkable days, they fought, and they fell . . .
“Stop the madness! Stop killing! Stop in God’s name!”
We could hear the priest yell . . .
Speaking: I was first up to the church . . . Riel looked my soul right through.
He said “Oh, Lord forgive them, for they know not what they do!”
I squirmed and started shaking when he looked me in the eye,
And I knew deep down in my soul that this great man. . . would have to die.
And in chains we took Riel away
And the little church rang its bell.
And dozens of men lay dead on the ground . . .
With a tale they never could tell.
With a tale they never could tell!
And the little church rang its bell . . .

An acclaimed ballad that tells of the heroics of the famous British nurse, and subsequent naming of the beautiful mountain and lake in Jasper National Park. Transcribed in Canadian Folk Music magazine, summer, 2007. Edith Cavell (words and music by John Spearn, © 1999 (Socan)

Johnny worked on the farms of the Alberta prairies, and thrived in the land of his birth
Then the war to end all wars, and adventure in Europe, he signed up to prove out his worth.
He advanced with the charge, through the gunfire and cannons, pressed on with his proud bravery
When the ground exploded in his tracks he just floated right down in the mud and debris
Gerry fought for the Kaiser when wars made us wiser in the trenches near Alsace-Lorraine
He dreamed of the Rhineland and a Fraulein so fine, but a chest wound, he struggled in vain
In a Hospice near Brussels, they awoke near each other, thank God we’re alive they did pray
I was sure I was a goner, they agreed with each other, through a sweet British nurse there that day.

She cared for the wounded, her heart to share, the lucky ones there did tell
Thanks and praise for a smile so rare, the soldiers, survivors of hell
At the feet of Nurse Edith Cavell

She calmed all the wounded, wherever they came from, she healed them and toiled with no fear
In a German advance she was caught and was questioned…she was executed that year
How could they know this fine lady so kind would be taken from them that day
The grief, and the sorrow, all mankind would borrow, in tears all the world would pray

Johnny and Gerry saw armistice come, soldiers’ stories to tell
Then it happened one day, by chance two were there
Two veteran survivors of hell, in the world’s most beautiful dell
At the foot of Mount Edith Cavell.

Based on an actual story from childhood, as told to the writer by his own father, on the arrival by train of a family to their unbroken northern Alberta homestead (Dapp, Alberta). Also used in above-mentioned grade seven Alberta Social Studies Teacher’s Guide, Nelson Thomson.

A tune to honour the pioneer environmentalist Wild Goose Jack Miner. Jack was the first researcher to band birds for migratory study. His son Kirk uses the song (gifted to him from the project) for visitors to the Wild Goose Jack Sanctuary in Kingsville, Ontario.

A tune to honour the pioneer environmentalist Wild Goose Jack Miner. Jack was the first researcher to band birds for migratory study. His son Kirk uses the song (gifted to him from the project) for visitors to the Wild Goose Jack Sanctuary in Kingsville, Ontario.

A portrayal of the experiences of many early Canadian immigrants and settlers.