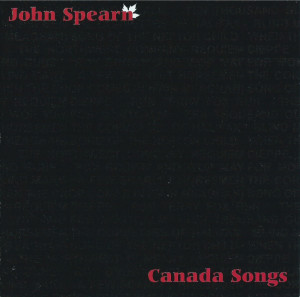 Released in 2002, this contains 12 original songs (plus an instrumental) that attempt to personalize, pay tribute to, or help stimulate an appreciation or understanding of an event or aspect of Canadiana: something that needs to be shared or understood, or a story that needs to be told.
Dieppe

Canada’s most tragic day occurred August 19, 1942 on the beaches of Dieppe, France. The song has been chosen for use by Alberta and Ontario School boards for curriculum. The Royal Canadian Legion website makes the song available for ceremony and Remembrance Day use.

We rode on a wave to Dieppe that day
There was Frenchy, Mack, n’ me, in our proud Black Berets.
Canadian Commandos, 5000 strong were we,
So glad to be delivering liberty
But the Germans were there, on the shore-
Dave Mack ran a gamut, way out in front of the boys
We just couldn’t see, through the smoke, fire, and noise
We knew he could run, but rock sand, his pack, and his gun . . .
In a blinding flash on the shore . . . cry no more.
Frenchy led the way past the gun-caves we could see,
With a fine eye and luck, he knocked out two or three,
The boys heard armor rollin’, closer than they wanted to be
It seemed so sudden, for Frenchy
“. . . Pousser des cris”
With as many dead as wounded, pinned down we can’t break free
I just want to go back to my Saskatoon prairie,
They’re picking us off like flies, I can’t take it no more
Dear Lord, please sail us off this shore . . .
1000 men lay dyin’, dear Lord . . . cry no more
[We rode on a wave, to Dieppe that day]…

An expose of the WW1 Battle of Vimy Ridge, as the valiant Canadian Corps won a stunning victory which cemented our nationhood, and changed the face of war forever. This song receives national CBC radio coverage on the April 9th anniversary.

Down the line we waited for the signal to run
On the ridge we’ll face 10 000 guns.
Over here in God’s hands where we can’t see the sun
[10 000 long miles from home] And again I dreamed of my Jenny
Back in the ‘Peg waiting for me.
Her brown hair and eyes spark a’plenty
And [soon to be married we’ll be].
Through no-man’s-land was the glory we found
Through craters and holes with our friends we were bound.
And our sons will carry our story on down
And have [peace in a world without end].
T’was then I saw my Jenny
But why can’t she see me?
Her brown eyes carry tears a’plenty
[10 000 miles cross the sea].
10 000 mothers are crying
10 000 sons paid to turn the tide.
And many a good lad still trying
[To cross to the other side]

A celtic-style portrayal honouring the lives and stories of many of Canada’s Irish immigrants.

When I saw Blind Mary, t’was nothing I could say
On the cliffs of Bantry Bay
But she smiled at me, her treasures for to see
Now I must be on my way.
Captain Shea is calling, the bugle beckons me
to the barge in Bantry Bay
And I’ll sail from here, to the hills of Calgary
From my home, far and away.
For you see, Blind Mary, forever she will stay
On the cliffs of Bantry Bay
She will wait for you, forever it will be
And she’ll live in your mem’ry.

Roy Brown and Wop May

The true EDMONTON story portraying the demise of the great Red Baron, Manfred Von Richtofen, on April 21st 1918, at the hands of two Edmonton flyboys, who both had attended our Victoria High School. This song is being considered for a theatre- media production at Fort Edmonton.

When the Crop Comes (Fair Meaghan)

The pioneer women of the west faced immeasurable hardships and heartbreak, yet persevered against incredible odds. Many left stately homes and families in the east to follow their roles and calling as “Mail Order Brides”. The recording utilizes international bagpipe champions from Edmonton’s Vimy Ridge Academy.

John received a written letter of acknowledgement from Betty and Rollie Fox for this 2002 work. The song has been used nationally on CBC radio (annually) for promotion of the September Terry Fox Run. Can be seen performed live at Churchill Square, Edmonton, on Youtube.

Song of the Nepton Child

A story of the most honorable of commanders from the Seven Year’s War, Louis-Joseph le Marquis de Montcalm perished at the Battle of Quebec in 1759. Utilized by Quebec teachers with notes and class activities available on-line.

The Corvettes of Halifax

Canada’s Navy was the third largest in the world in 1945. The Corvette gunboats that escorted the Merchant Marine ships across the submarine infested North Atlantic to save Britain from the Nazi’s (and certain peril) is a remarkable legacy. This song was the reason John was chosen to perform at the Stan Roger’s Festival in Canso, NS. As a result John was able to visit the HMCS Sackville, the last remaining Corvette, a museum piece in Halifax harbour, and warmly gifted the offer to have the song be put to use at the site.